Every class has a specific starting area on the skill tree in Path of Exile. Starting at the top and working clockwise, we have the Witch, the Shadow, the Ranger, the Duelist, the Marauder, the Templar, and finally, dead center, the Scion. 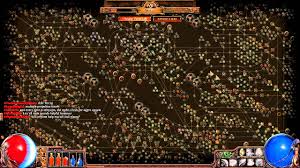 The tree may seem a little intimidating at first, but it may make things easier to realize that you can group the nodes into four categories.

Starting Areas: These areas are where you’ll be starting your character, but there’s absolutely nothing keeping you from heading toward another class’s nodes! The nodes where you begin are often very powerful, and it’s not a bad idea to scan your neighbors’ starting points to see if they’ve got anything you could… borrow.

Paths: Approximately 30% of the skill tree is composed of nodes that grant +10 to one of the three base stats. These nodes are generally used to move around the tree and get to Clusters and Keystones.

Clusters: Groups of nodes with a common theme, frequently represented by a small icon in the center. As an example, the cluster focusing on lightning spell damage has an image of a lightning bolt in the center. Clusters can range in size from three nodes (Acrobatics Improvement, located behind the Acrobatics keystone) to as many as twelve (wand physical damage). Many clusters also have a notable passive, a special node rimmed in gold that is more powerful than other nodes and can have as many as four modifiers while normal nodes have a maximum of two.

Keystones: Special and very powerful nodes that change a basic game mechanic for your character. Resolute Technique will prevent you from ever missing again, but it’ll cost you every critical strike you will ever land. Elemental Equilibrium will reward you for alternating elemental damage, but punish you for using the same element consistently. Each keystone gives a buff and a nerf, with the exception of Phase Acrobatics, which grants +30% spell dodge, but requires taking Acrobatics, which cuts armor and energy shield in half, and reduces block chance.

Plan ahead, for there are no full respecs in Path of Exile (except when a major patch changes the skill tree). Respec points are available through completing quests and spending Orb of Regret Path of Exile currency items, but these are pricey and if you find yourself built in a corner, it’s often best to reroll (start over).