Skip to content
Home > Other Games > Madden NFL 18 Has Been Designed Especially For Diehard Fans
Published November 18, 2017 by

Madden NFL 18 Has Been Designed Especially For Diehard Fans

Although football is the ultimate sport in America and in recent years has increased the fascination in this country, you are content in our latitudes with a rather small fan base. The same is true for Electronic Arts “Madden NFL 18”. The series is a cornerstone in the history of the company and is one of the most important sports games in the world alongside the “FIFA” series. That’s why we set out to win the virtual Super Bowl. 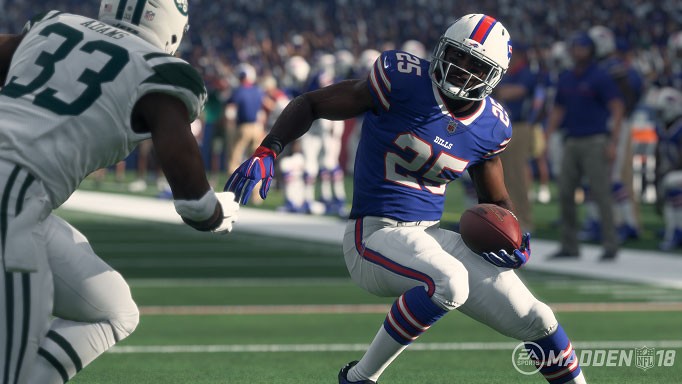 Back to the game. At the beginning you can decide for one of the three game variants, which is one of the new features. Arcade is Madden’s fastest variant. Here are exciting moves, high scores and spectacular catches in the foreground. Penalties are rarely distributed and the player controlled player makes the difference. This mode is perfect for a cozy “Madden” game full of action. Simulation is the authentic version that should be as real as possible and is suitable for true football fans who want to experience the game in its purest form. Finally, there is the competitive variant. This is all about the duel in head-to-head games and in tournaments. The capabilities on the controller are crucial here. Although the three variants set out a broad field, players should familiarize themselves with all three, because for some modes, the variants are given.

If you’re new to the game like me, you’ll get the opportunity to prepare for your career with an extremely comprehensive tutorial of over 80 exercises. Although some of the exercises are very similar in the beginning and some instructions are not very clear, the tutorial generally prepares you for the game.

Roughly, there are three game modes. Above all, of course, the Ultimate Team, next you can start a career in franchise mode and, last but not least, the newly introduced Longshot. This is a story mode based on the “Journey” mode introduced last year in the “FIFA” series. Players take on the role of quarterback Devin Wade, who would like to make it into the NFL. Without giving too much away, one can say that Longshot offers a theatrical story of loss, self-doubt and friendship. At the heart of the story is the TV series Longshot, which accompanies Devin on his way to the NFL. You can always make decisions that affect the scouts’ reports. In addition, there are a few exercises in which you have to prove his football IQ and playful skills. These vary in difficulty, but when it comes to essential moments, the controls change to the simplest live-action operation, where you only have to press the flashing buttons. In addition, some events are provided during the exercises, so that even with a perfect move no further comes. All in all, Longshot is more of a mediocre football movie, in which one takes over the control and can make some decisions from time to time. After all, the story is choppy after a few hours and a real NFL game does not even happen.

Depending on how successful you were in Longshot, you can directly unlock some items for the Ultimate Team and spin the story a little further in the challenges. However, one notices here but also in the franchise mode, which value one had in the development of the new longshot mode. Because with the other modes, there are only a few innovations. With the MUT levels, there are experience points after each game – if you step up, waving rewards. In addition, you can compete in MUT squads in 3v3 games against each other. Here, one player controls the offense, the defense and one acts as a head coach.

Although there is little new content, “Madden NFL 18” still offers a new gaming experience. Because not only in the story mode, it was based on “FIFA”, also in the engine has taken the step from Ignite to Frostbite. The gameplay is now a bit slower and the AI acts smarter, at least on higher levels of difficulty. In addition, the atmosphere in the stadiums overwhelming and the fans seem to be a bit overwhelming.

Furthermore, EA has retained its years of experience and focus. So you get not only as usual a game with the necessary licenses and a great presentation offered, also the soundtrack and the commentators are the finest. As usual, the Ultimate Team offers enough incentives to collect cards and strengthen their team.

In sports games there is always the debate in the room on how much a game should develop. May one rest on the licenses alone? The answer is quite clear: no. But even if there is no particular change in the MUT and franchise mode at first glance, the creation of the longshot story and the introduction of a new engine did not make you rest – even if the story mode is not completely convincing and a slower one Gameplay is certainly a matter of taste. Nevertheless, one feels through and through the love of football. Accordingly, the game has been designed especially for diehard fans and just to recommend such. But even as a freshman you get a lot of entertainment and if necessary also taught the basics.

If you want to buy excellent players in MUT mode after the release of Madden 18, you can choose buy cheap Madden 18 coins for sale on madden-store.com. You won’t want to miss them.